Express U14 boys rally for gold

Congratulations to our U14 boys who won provincial gold and our U15 girls who brought home provincial bronze.  Click Here for the full article.

Since 2011, the city of St. Thomas and Elgin County has offered volleyball at the Grassroots and House League levels with SPIKES St. Thomas. More than 400 little ‘SPIKERS’ have learned not only the beautiful game of volleyball but important life skills as well. In 2016, SPIKES St. Thomas partnered with the Forest City Volleyball Club (FCVC) to launch its first ever competitive program: Forest City Express. That partnership culminated in a very successful U14 Girls’ program (and a silver medal at the Ontario Provincial Championships for the U13 Girls).

“We’re very thankful to the members of the FCVC for their support,” said Dennis Dlouhy, St. Thomas Volleyball club president. “But St. Thomas is a proud community, and we wanted a volleyball identity of its own.”

Starting in September of 2017, the St. Thomas Express Volleyball Club (aka ExpressVC) will continue to teach two simple things: Joy and Technique. But now, in addition to its Grassroots and House League programs, it will be expanding its competitive offerings to U12, U13, U14 and U15 girls as well as U13 and 14 boys.

“This is an exciting expansion for our club – and for volleyball in St. Thomas,” said Dlouhy.

Registration is now open, and interested families are encouraged to visit our website at www.Expressvc.ca to choose a program that is right for them. Come and join the Express!

Published by SportsXpress On September 10, 2016

For many years, children in St. Thomas have had a lot of choice in terms of participation in quality local sports programs. Volleyball, however, has never been an option outside of the school system. That changed in 2011 when Ken Gadsdon and Dennis Dlouhy started their chapter of the Ontario Volleyball Association’s SPIKES program. Since its inception, SPIKES St. Thomas has seen hundreds of children participate in the grassroots program, which has focused on teaching two things: Joy and Technique.

“Here, we grow again,” says Dlouhy with a smirk.

“Children can now see a clear path from first touch to elite competition,” beams Dlouhy. “While we are striving to grow and offer different levels of play, we will always focus on two things: Joy and Technique.”

For information about becoming a coach, volunteer or player with SPIKES St. Thomas, please visit spikesstthomas.ca or call Dennis Dlouhy at www.ExpressVC.ca.

Tryouts for the club begin September 12.

Several St. Thomas residents will be honoured for their accomplishments.

Mayor Heather Jackson, city council and the Honours and Awards Committee will pay tribute to the winners at a banquet April 23.

The nominees were lauded for their outstanding community achievements in the areas of sports, volunteerism and special contributions.

The following are the winners of the 42nd Annual Honour and Awards List of Recipients:

Tickets are $18 for adults and $12 for children (12 and under) and can be purchased at the Parks and Recreation Department, in the Timken Centre.

No articles found based on your tag selection. 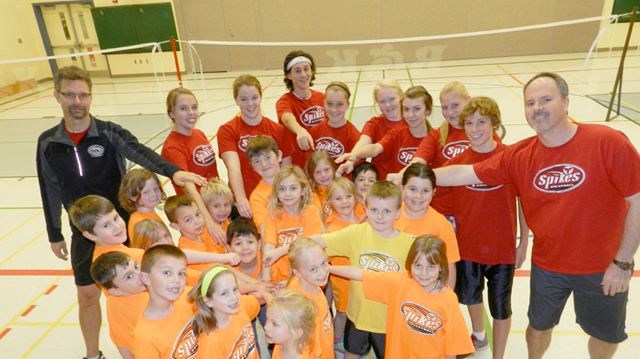 Dennis Dlouhy, left, and Ken Gadsdon, right, founded the St. Thomas SPIKES ­volleyball program. The program has been running at capacity since it started in fall of last year. This year’s session of Friday meet-ups will end Dec. 13. - Jesse Cnockaert

When parents think about involving their kids in sports there are a lot of options to choose from.

While sports like hockey and soccer dominate, how many consider playing volleyball?

Ken Gadsdon is a coach for the Pierre Elliott Trudeau senior elementary boys  volleyball team and he coordinates the drop-in volleyball program at the St. Thomas YMCA for those aged 13 and up.

Last year, Ken looked around St. Thomas and didn’t think there was enough going on to grow local volleyball talent.

He joined forces with his friend Dennis Dlouhy, a teacher and volleyball coach at Parkside Collegiate Institute, to make that change.

Last fall the two brought the Ontario Volleyball Association SPIKES program to the area to get kids involved in volleyball.

And it’s been working.

Since they started, SPIKES has been running at full capacity. More than 60 elementary school players per session are common.

“It really is a team sport. In soccer you can kind of be a super star... in volleyball you’re only ever allowed to touch the ball one time, then you rely on your team mates,” Ken said. “It really does require teamwork in the truest sense.”

The program is available for kids in grades 1-3, another for grades 4-6 and another for grades 7-8. The kids meet every Friday at Pierre Elliott Trudeau school to learn about volleyball. The complexity of what they do increases with their age level.

“It’s unique in St. Thomas. There are other sports that start at a young age. Often volleyball doesn’t start until later in life because it’s seen as a sport young people can’t play,” Dennis said. “We’ve taken it and made it into an activity that incorporates the fundamental skills of catching and throwing. As they improve, they turn it into volleyball skills, but it’s more about team work and fun, under the pretext of volleyball.”

Ken and Dennis are helped out by older student leaders from Parkside. There are usually between eight to 12 student leaders at any given session, helping the younger kids.

“I think the key is having the Parkside leaders here,” Dennis said. “The kids see them as leaders. They see them as role models ... They volunteer their time to be here. Some of them even ask to come back after every session.”

Having the extra coaches means more personal attention may be given to each child. The SPIKES program has been getting noticed, and was recently added to activeelgin.ca.

“It has been a lot of fun, and judging by how many repeat ‘little Spikers’ we have, we must be doing something pretty well,” Ken said.

Send an email to spikesstthomas@rogers.com to ask about SPIKE’s next session starting in January, 2014.